Why You Need Antioxidants

The Internet is peppered with articles about the medicinal benefits herbs and superfoods. Most of the time, these benefits are attributed to the high levels of  antioxidants in the foods. But what is it about antioxidants that's so good for us?

As the name implies, antioxidants are compounds that combat the harmful effects of oxidation, also known as "oxidative stress." They do this by mopping up toxic chemical species called free radicals, which are the products of the many chemical reactions that take place within our bodies’ cells, every moment of every day.

Never, ever, ask this question in a roomful of chemists. Some will tell you it’s the removal of electrons from a molecule, while others will say it’s the removal of hydrogen atoms or the addition of oxygen. Others will whip out a pen and start jotting redox reactions on a napkin, gleefully noting each cation, anion and neutral molecule on both sides. All of these explanations are correct.

What they have in common is the fleeting production of toxic, high-energy chemical species called free radicals. Think of a biological reaction as a game of musical chairs. Instead of a chair, someone takes away an electron that someone gets stuck with when the music’s over. Now think of the spare chair repeatedly causing multiple pairs of chairs to explode.

Electrons are supposed to travel in pairs. A free radical has a spare electron and behaves with indecent haste to pair it up with another. They’ll either dump the spare in another molecule or snatch one from another. A spare electron in its orbit is a highly unstable situation for a molecule. It takes a huge amount of energy to maintain that state, and a huge amount of energy is released into the immediate molecular environment to cause molecular mayhem.

It’s all fun and games until someone gets hurt, and in the case of oxidation, the injured party is often a cell membrane, protein or a strand of nucleic acid (DNA or RNA). The most common free radicals are the O. (superoxide) and .OH (hydroxyl) radicals.

There are two mechanisms by which free radicals cause cell damage. These are lipid peroxidation and oxidation of proteins and nucleic acids.

Free radical formation occurs in the normal course of such physiological activities as digestion and breathing. It also happens under abnormal or pathological conditions such as:

Next, we’re going to take a look at two real-life antioxidants and their strategies for maintaining cellular order. Astaxanthin shields the vulnerable region of cell membranes from attack, while Coenzyme Q 10 is stored and functions in the mitochondria. 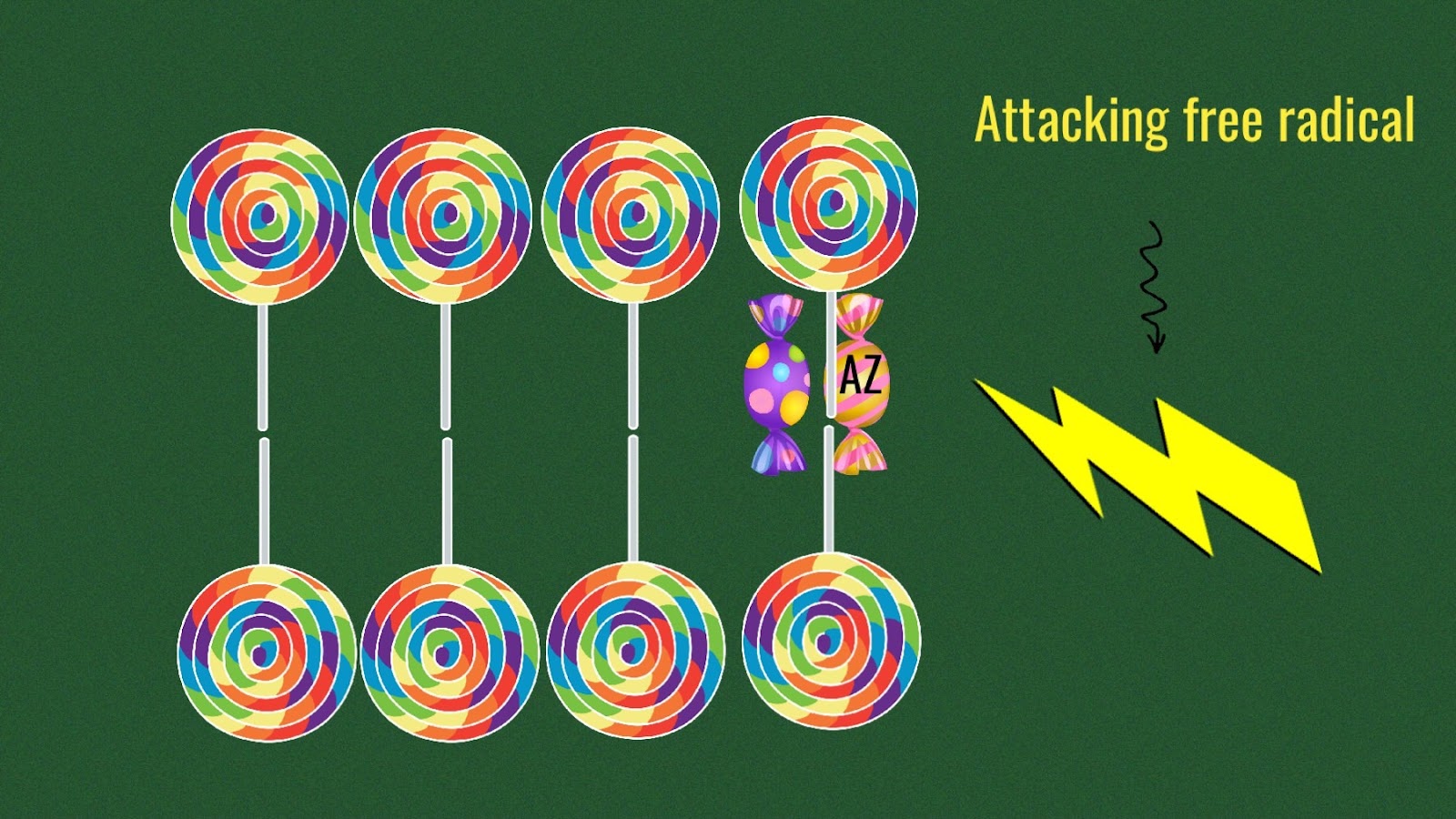 Figure 1 — This diagram shows the phospholipid structure of the human cell membrane. Lollipop circles represent the hydrophilic (aqueous, water-loving) heads of the individual molecules that form the membrane, while the lollipop sticks are the hydrophobic (fatty, water-hating) regións. Free radicals attempt to attack at the interface between the two, where the AZ molecules attach to protect the membrane from the highly reactive invading species.

Coenzyme Q10 ( CoQ10) is manufactured in the body. It's also available through supplements or foods. It is not stored in the body, so needs constant replenishing.

Low levels of CoQ10 are linked to heart disease, brain disorders, diabetes and cancer, although it is not yet known whether these conditions are the cause or the effect of low CoQ10.

CoQ10 is stored in the mitochondria, which are membrane-bound ‘power houses’ of the cells that produce energy from glucose and protect cells from oxidative damage and from diseases caused by viruses and bacteria.

CoQ10 decreases from the age of 30, so older people tend to be deficient.

What does this mean for you?

Not all antioxidants are the same. The free radicals they protect us from attack our cells in different ways. In the same way the Niners defensive coach doesn't send out the same player on the field to stop a field goal as he does to block the opposition’s passing or running drive, buying a sackful of carrots at the supermarket isn’t going to supply you with all your varying antioxidant needs.

If you are in peak physical condition, grow your own fruit and vegetables, and lead a stress-free life, you just might be able to meet all your antioxidant requirements from your diet. Otherwise, you might need a supplement containing multiple antioxidant compounds to protect your cell membranes, mitochondria, proteins and DNA.